A Plugfest is a gathering of geeks; an opportunity for developers from different organizations to get together and throw virtual snowballs at one another’s products to see what breaks.  Plugfests are supposed to be fun, but also productive.  Participants learn new things about their own code (where it’s weak, where it’s limited), but also learn as much as they can about the competition and the underlying technology that brings them all together.

An SMB Plugfest focuses on interoperability with the Server Message Block network file protocol; the one that’s favored by Microsoft, the one that lets you map the Q: drive to the server.  SMB is also the protocol that Samba runs, and it is used in all sorts of devices from cellphones to home office file servers to big-iron data storage systems.  There are very few people who really know the guts of SMB, and I am one of those “lucky” few.

So I go to SMB Plugfests whenever I can.

These days, I go as part of a product team working on merging Samba with GlusterFS, a distributed file system that lets you build a scalable storage array from standard-issue PCs. The tough part for us is getting Samba to run on all of those PCs as if it were running on a single machine.  It’s a challenge, but we have a few tricks up our collective sleeves.

In early December 2013, Microsoft held an SMB Plugfest in Shanghai.  I got to go, and I was able to bring along two of my colleagues from Bangalore. 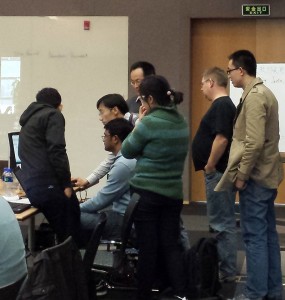 We spent the first day setting up the test gear.  For the remainder of the event we worked directly with Microsoft’s test suite developers and also attracted the attention of engineers from other participating companies.  We focused our efforts on learning how to use Microsoft’s new SMB3 test suite, and seeing how it behaved when aimed at our Samba-GlusterFS server setup.

We did find some issues in our configuration, and we gave Microsoft a lot of feedback on their test suite.  As an Open Source group, we also spent time working with other participants, helping them with their testing and explaining what we could about the odd behaviors they were seeing in their results.

This entry was posted in China, Notoriety, Samba, SMB/CIFS and tagged LinkedIn, Samba. Bookmark the permalink.